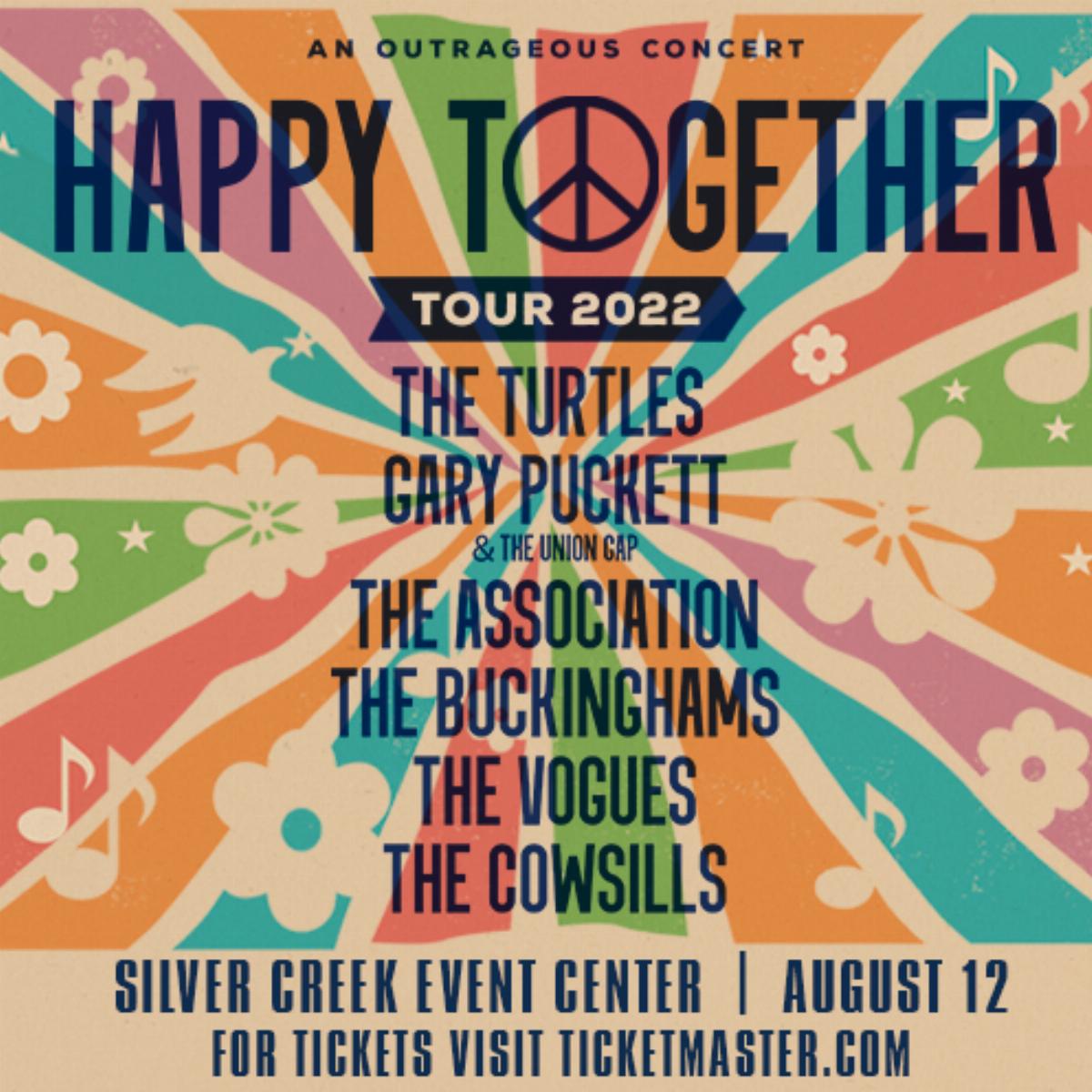 2022 will mark the 13th year of the highly successful, hit-filled summer package, The “Happy Together” Tour.  The touring sensation that has crisscrossed the nation delighting audiences for a over a decade returns this summer with a show full of chart-topping hits from the ‘60s and ‘70s – an undeniable 61 Billboard Top 40 smashes.  The Tour is once again joined by The Turtles, who also act as musical hosts for the evening.  Along with The Turtles will be Gary Puckett & The Union Gap, The Association, The Buckinghams, The Vogues, and The Cowsills.

The Turtles are best known for their harmony-heavy California pop sound.  With such hits as “Elenore,” “She’d Rather Be With Me,” “It Ain’t Me Babe,” “You Showed Me,” and the title of the tour, “Happy Together,” the band ruled the airwaves in the late ‘60s.  Ron Dante joins the line-up to delight with his own mega-hits, “Sugar” and “Tracy.”

Gary Puckett & The Union Gap are back on The “Happy Together” Tour for 2022.  Gary’s trademark voice will be belting out his hits one more time.  Fans will affectionately remember “Young Girl,” “Over You,” “Woman, Woman,” “This Girl Is A Woman Now,” “Lady Willpower,” “Don’t Give In To Him” and more.

Also returning to the tour for 2022 are The Association, who enjoyed massive radio success in the ‘60s with such #1 hits as “Cherish,” “Windy,” “Never My Love,” and “Along Comes Mary.”  This iconic vocal group was a staple on the radio airways in the 1960s.

The Buckinghams were formed in 1966, and went on to become one of the top selling acts of late 1960’s, including their #1 hit “Kind of a Drag,” and other hits “Don’t You Care,” ”Mercy, Mercy, Mercy,” and "Hey Baby, They're Playing Our Song."  With three chart hits at one time on two labels in 1967, Billboard Magazine named them "The Most Listened to Band in America."

The Vogues are also known for their harmony-driven soaring  pop sound.  The Vogues had numerous Top 10 hits with singles such as “Five O’Clock World,” “You’re The One,” “My Special Angel,” and “Turn Around Look At Me,” among others.

Rounding out the bill are The Cowsills, the harmonious family act (two brothers and a sister) that inspired the smash ‘60s hit television show, The Partridge Family.  They are sure to delight with their best-known songs, “Hair,” “Indian Lake,” “The Rain The Park & Other Things (I Love The Flower Girl)” and more.

The tour has played more than 50 plus shows a year and 2022 will be no exception.  More information on the Happy Together Tour is available at https://theturtles.com/tour.