A History Play For The Future 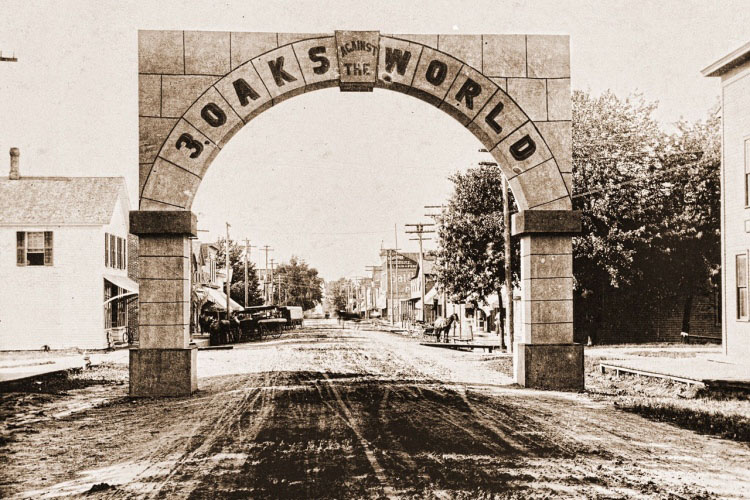 In honor of its Sesquicentennial, the heartwarming and entertaining history of Three Oaks comes to life through story and song on September 9 and 10. The Acorn Theater presents the free play, Three Oaks Against the World. Tickets, however, are required.

Written by philanthropist Allen Turner, and directed by John Hancock, an Obie winning stage and award-winning film director (Bang The Drum Slowly), the play sparkles with original music by Turner and Garth Taylor of the School of American Music located in Three Oaks. It brings to life the fascinating stories of the founders and those who later shaped the village as it is known today.

Children and adults will enjoy the light, humorous moments peppered with sentiment. The play heralds deep respect for the village, its history and the residents, some who will perform in this original production.

A local newspaper coined the fitting title, Three Oaks Against the World, in 1899 after the village won a government-sponsored competition by raising $1,400. Three Oaks was awarded the cannon captured by Admiral George Dewey in the Spanish-American War. A historical marker and the cannon proudly sit today in Dewey Cannon Park.

The following are excerpts from a conversation with author and songwriter Allen Turner and composer Garth Taylor.

Tell me about your relationship with Three Oaks.
“When I discovered the historic significance of my home which was built in 1866, it changed everything for me,” revealed Turner.

Originally from Chicago, Turner came to the area on family vacations as a child. His mother hailed from Buchanan, MI. Always an apartment dweller, his first home is the one he currently owns with his wife Lynn. This Three Oaks home is a treasured place for their family to gather and play.

Consequently, the Turners became deeply invested in the vitality of the community on both personal and philanthropic levels. Turner’s respect for the original settlers and shapers of Three Oaks, most notably the Edward Kirk Warren family (founders of the Featherbone Factory), gels with his deeper personal desire to “…do good whenever possible.” Turner sees in Warren a role model for today. “Warren had a vision of how people ought to live, and they made money and gave back in an effort to support this vision.” This humanistic perspective motivated Turner’s approach to the play.

How did you decide to do a play?
The Three Oaks Sesquicentennial Celebration Planning Committee embraced the 90-minute play when Turner stepped up to the plate. Turner remarked with a sly smile, “No one else wanted to write it, so I wrote it with music, and the committee liked it.”

With Hancock and Taylor supportive from the start, intense development began in the fall of 2016. In a collaborative spirit the play was passed around the committee and suggestions were made.

How did you do your research?
After being inspired by the historical significance of his Three Oaks home, Turner searched for the facts from Three Oaks residents, local history committees, the Potawatomi tribe, and over 80 hours in the local library.

Taylor poured through old sheet music and researched historical musical styles.
A huge win for Taylor was discovering the “The Admiral Dewey March,” the song composed for and played at the cannon’s dedication ceremony. “The march has never been played since,” laughs Taylor.

Another exciting discovery made by Taylor was the song, “Queen of the Woods,” written in the late 1800’s by Chief Simon Pokagon II of the Potawatomi Tribe.

Tell me about your experience and process in the creation of this historical play.
Taylor delighted in letting his composer brain think like a composer of yore and then later re-working the music for modern sensibilities while retaining the original feel of the music. “The most fascinating thing was finding the musical scores which totally brought alive the images and speculations of what life was like here in the early days – and these treasures inspired original pieces of music. I enjoyed the challenge of writing music in those periods. It’s been a personal journey back in time to become a composer of 100 years ago. Like time traveling through music.”

What do you hope the audience will take away from the play?
“I want to create a vivid emotional picture of the history and the period, in as deep and meaningful way as possible,” mused Taylor.
Turner added, “I want the audience to feel a connection to the village of Three Oaks. I hope to inspire residents to maintain the enthusiasm of the town and look to its future. That’s it! A history play about the future…”

This free event is a gift to the community from Lynn and Allen Turner. Tickets are now available.

Writer’s Bio
Doreen Stelton lives in Three Oaks where she does a little bit of a lot of things including working at the Acorn Theater, teaching yoga, making natural perfume, writing, and hunting for faeries with her dog Missy. Follow her on FB, IG, and at her website www.verdantfaerie.com.