Get a gull’s-eye view of Lake Michigan when you take a St. Joseph Lighthouse Tour 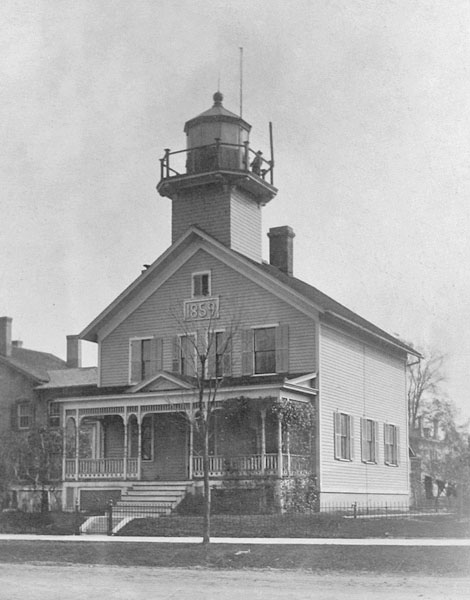 Southwest Michigan residents and visitors have an incredible opportunity to discover firsthand the importance of Lake Michigan to our local heritage through St. Joseph Lighthouse Tours (which includes an optional walk to the top of the tower)!

The iconic North Pier lighthouses we see today are more than a century old. They are the most recent in a long line of St. Joseph lighthouses that stretch back to 1832. In fact, St. Joseph was the site of the second lighthouse ever built on Lake Michigan.

The St. Joseph River is a large and strong waterway that offered early European and American settlers access to both inland Michigan and Indiana, as well as a shortcut to the Kankakee River and the Mississippi River basin. However, the shallow and shifting mouth of the river ensured that sailors would need some help navigating its waters.

The first lighthouse in St. Joseph was built on the bluff in 1832. It was a round, conical, brick tower that probably looked a lot like Ohio’s Marblehead lighthouse, although there are no surviving images known. By the 1840s, Congress had authorized dredging the harbor and the construction of North and South Piers in Lake Michigan. In 1846, the first pierhead lighthouse was built on the South Pier. 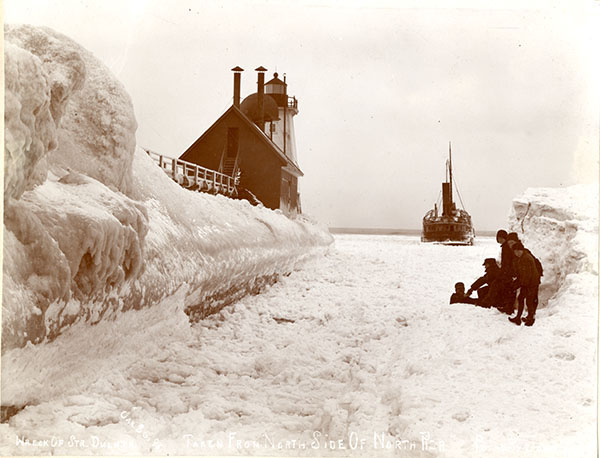 Lighthouse beacons and improved piers weren’t the only safety measures put in place for mariners. In the 1880s, the first fog bell was installed on the North Pier lighthouse and replaced in the next decade with a steam-powered fog signal and an extra building on the pier to house the equipment. 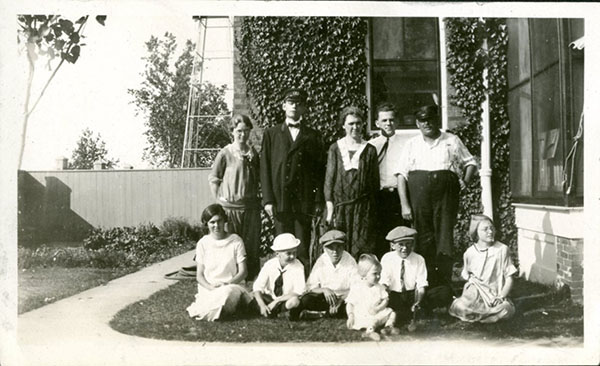 By the turn of the 20th century, it was clear that wooden lighthouses were no match for Lake Michigan’s fury, especially in the winter. A storm in 1904 nearly demolished the 1885 lighthouse! Construction on our current steel lighthouses began on the North Pier in 1906, with a much larger Inner Light that could also house the fog signal.

Our volunteers are often asked why we have two lighthouses on the North Pier. These two towers work together to form a range system. With a nearly 22-foot difference in height, the two lights are both visible simultaneously to boats out in the lake. When the two lights appear aligned directly on top of each other, the ship is also aligned with the mouth of the river and can sail safely between the two piers.
All these lighthouses and fog signals made St. Joseph’s and Benton Harbor’s development possible. These are the beacons that guided ships full of fruit, manufactured goods and tourists through the Twin Cities, with especially heavy traffic in the 19th and early 20th centuries. 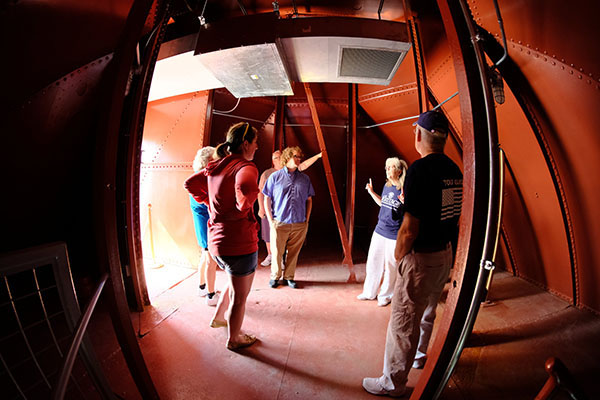 Eventually, though, automation and satellite navigation replaced lighthouse keepers and lighthouses. The lighthouse on the bluff in town was decommissioned in 1924 and demolished in 1955 to make way for the parking lot now on its site. The demolition was met with outcry from local citizens and former lighthouse keepers alike who envisioned a museum dedicated to the Twin Cities’ (St. Joseph and Benton Harbor) maritime heritage.

Today, The Heritage Museum & Cultural Center is proud to bring their vision to life, albeit at a different lighthouse. Thanks to the Lighthouse Forever Fund and recent restoration, the North Pier Inner Light is now open to the public for walking tours, guided tower climbs and open hours. These tours are staffed by knowledgeable guides who are excited to share with you how the lighthouses fostered the Twin Cities’ development.

Join us every Friday and Saturday through Labor Day (weather permitting) for a guided walking tour at 10:00 a.m., or during our open hours. The lighthouse is open Thursday, 5-8 pm, Friday and Saturday 11 am to 2 pm, and 5-8 pm, and Sunday 2-6 pm.  Reservations are recommended for the walking tours, but tower climb tickets are available at the Inner Light during open hours on a first-come, first-served basis. Walking tours, which include tower climbs, start at Tiscornia Beach. They are $10/adult and $5/child.

For more information, go to theheritagemcc.org. To book your private lighthouse tour, contact This email address is being protected from spambots. You need JavaScript enabled to view it..

Photo Information:
1. This lighthouse was built on the bluff near the present-day Curious Kids Museum and was an active lighthouse until 1924.
2. The 1885 Lighthouse and fog signal building are clear in the foreground of this winter scene from 1898. The wreck of the City of Duluth is visible just beyond the pier.
3. Keeper Ferdinand Ollhoff and his family moved into the Lighthouse Service duplex on North Pier Street in 1916.
4. A crew of dedicated volunteers from the Heritage Museum & Cultural Center is ready to welcome visitors to the Inner Light & Fog Signal building (photo credit: Andrew Sawyer).